You are here: Home1 / Blog2 / About Us At Mad River Garlic Growers 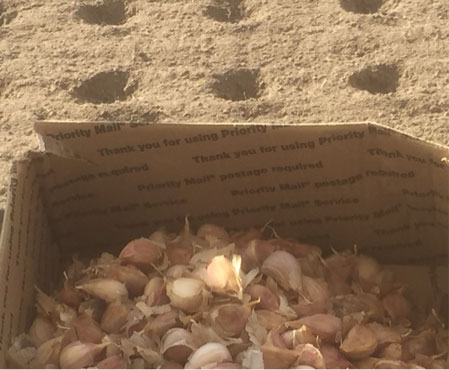 I have lived in Southwest Ohio my entire life. I grew up in what today is suburbia but back then the farmer lived across the street and others close by. It was common to have large gardens that your family lived off of and country style lives. We always had a large garden and there was always garden work but that was just the way of life. Those are happy memories. I would often sit and snap beans as a little girl or help pull weeds. Our chores became more involved as we grew up. We ate well and we ate healthy. My mom was ahead of her years as she seldom allowed us to binge on sugar snacks and she always controlled our fat intake. No mistake we were a normal sixties family but we ate what was made by our mother who did not like greasy food and felt excess sugar was not healthy. My mother is still with us and now 93 years young and still does her own cooking.

In the latter 1960’s life started to change. Convenience foods became the rage. TV dinners, canned lasagna, fruit juice from a can that I’m pretty sure was all flavorings and sugar. And of course those famous cream filled sponge cakes. Fast food soon became popular and affordable. As a younger child we never ate out. Well very seldom. I think once or twice a year we’d all get dressed up and go for fried chicken or an Italian dinner. Fast forward to today and that all seems so funny.

Today however I think there comes a realization that the fast and convenient may not be the fuel for good health. When you think of European farmers they eat simply but well. Many of those foods became desired and sought after by non farm people. So we know now that although the fertilizers grew enormous produce and the pesticides allowed them to be blemishe free that they were not good to our human bodies and now we pedal back to a more sustainable time.

My husband grew up in the same kind of setting that I did but even more so a country environment among larger farms. He worked on those farms in the summers bailing hay and knew he loved that lifestyle. We were fortunate 20 years ago to have made our home where we still live today. We of course have always had a large garden, and an orchard which expanded to add a garlic patch which then became our garlic farm.

We have never used pesticides or unnatural fertilizers on our gardens so it made complete sence that when we started our garlic project which turned into a garlic farm that it would naturally be an organic farm.

Want to join the discussion?
Feel free to contribute!

Weeding for a LivingSilverskin Garlic
Scroll to top